As if watching a game wasn’t nerve-racking enough: Vibrating football shirt lets you feel the highs and lows of a big match

If watching football in 4K ultra high definition with surround sound and real time stats flooding in over the iPad isn’t enough, footie fans will soon be able to ‘feel’ the game, thanks to a new fan shirt.

Fans can wear their team’s shirt with pride with added haptic feedback sending subtle vibrations to the user’s chest whenever players score a goal, pick up a card, or any other key event during the game.

The ‘Football Fan Shirt’ is the brainchild of Sydney based Wearable Experiments, which claims the shirt is ‘the fourth dimension of entertainment’ and connects fans to the players like never before. 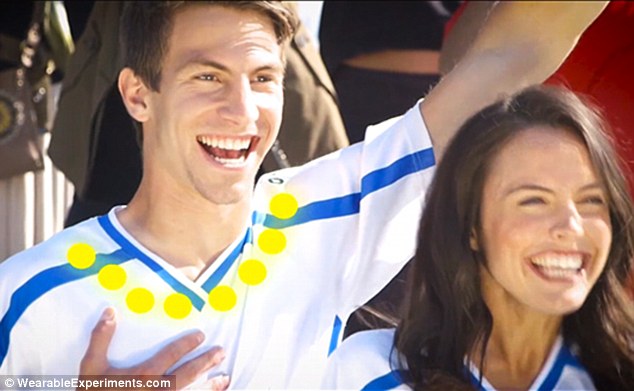 The ‘Football Fan Shirt’ (pictured) connect to a smartphone app via Bluetooth and the wearer receives haptic feedback every time there is an event in the game, including goals, cards, fouls and celebrations

And the shirt is being launched in time for the European Championships, taking place across France.

Users connect their shirt to their smartphone via Bluetooth and receive feedback every time there is an event in the game, including goals, cards, fouls and celebrations.

Through the dedicated app, users can pick their team and the app then uses real time game data to tell the shirt when to buzz.

It connects to an app on the user’s phone via Bluetooth and uses real-time game data.

The shirt’s makers claim it vibrates at key events during the game, including goals, cards, fouls and more.

According to Wearable Experiments: ‘This creates a heightened sense of excitement blurring the lines between player and spectator.’

Wearable Experiments (or We:eX), which also has offices in New York, unveiled a shirt for American football fans at the Super Bowl in February. 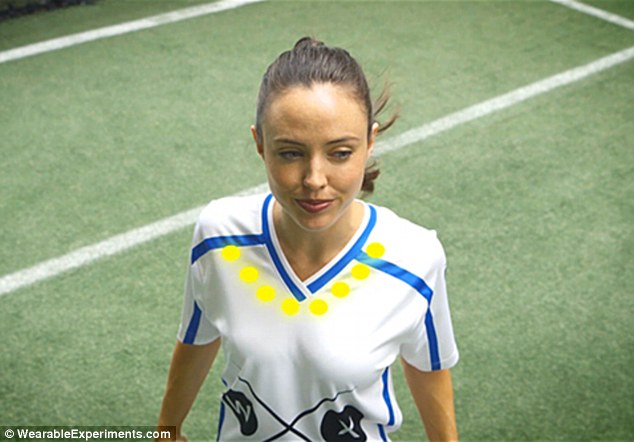 Football Fan Shirt sends haptic feedback vibrations to the wearer’s chest (shirt pictured, with yellow dots indicating where the feedback is felt). It connects to an app on the user’s phone via Bluetooth and uses real-time game data

In 2014, We:eX was tasked with merging hardware software and clothing design for an experiment to create ‘Alert Shirt’, the precursor to the latest shirt.

Billie Whitehouse, designer and director of We:eX said at the time: ‘Wearable technology must be intuitive and seamless within our daily lives, enhancing our life experience while connecting us to other people and the world at large.

‘[Alert Shirt] is a major first step in the right direction.’

However, it remains to be seen whether the Football Fan Shirt can survive a celebratory soaking after a big win, or even the drizzle of British summertime for fans watching games at grounds around the country.