This DIY Wearable Lets Kids Make and Program Their Own Toys

Technology Will Save Us, the London-based tech-for-kids company, recently launched a Kickstarter campaign for their new wearable device (a slight departure from the DIY kits they are known for). Inspired by the potentials of learning by doing (and playing!) the Mover Kit offers an intuitive way for kids to learn the fundamental principles of programming, electronics and computational thinking. “While kids are avid consumers of technology, they can find creating and making with it complex and scary. Kids who might want to get involved in making with digital technologies are getting left behind,” says TWSU co-founder and CEO, Bethany Koby. “Mover Kit is about educating kids through play and also addressing the ever-present problem of our gender gap.”

Straight out of the box, the kit contains a core unit (which looks a bit like a bicycle bell), a circuit board, an accelerometer, a magnetometer and eight RGB LED lights. Once the kit is put together (the team estimates only a 15-minute assembly time), the toy is basically a blank slate for kids’ imagination’s to run wild. 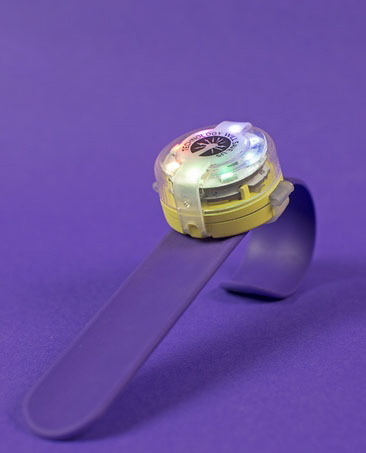 The Mover can be programmed to animate an endless list of games and activities. “We designed Mover Kit alongside children and tested prototypes with over 300 kids,” says Koby. “They showed us that they were most excited about technology that they could wear and that responded to activities.” One child built a robot costume and programmed his Mover to light a string of LED lights when he walks. Another turned his gadget into a compass, programming it to light up only when he is moving North. Others use them as bike lights. The Mover gives kids the opportunity to flex their creative muscles without constraint—first imagining the use, then creating the object and rules to make it happen.

Some kids use the Mover to activate their fantasies—like this pretty awesome lightsaber—while others use their Movers to keep tabs on their daily routines, like the kid who programmed his Mover to light up after two minutes of tooth brushing.

Once the kit is built, it can be easily reprogrammed through an accompanying online platform called Make. Featuring a simple, block-based interface, kids learn the basics of coding through a basic “if this, then that” logic. There’s also an open-source platform where kids can browse and download preprogrammed modes designed by other children. That’s the only time kids interact with a screen during the process—once their Mover is programmed it becomes a part of their daily lives. “We don’t want this to be something that needs a screen, it’s something you do in the world,” explains Koby.